Sofia will be the first UK offshore wind farm to integrate both light detection and ranging (LiDAR) and traditional digital aerial surveys in a single aircraft for its pre-construction ornithology surveys.

Two UK consultancies – aerial survey experts APEM and specialist ornithological consultants NIRAS – have been engaged by Sofia, 100% owned by RWE, to develop the project’s Ornithology Monitoring Plan and carry out the innovative work, which is now seen as the most accurate and precise way to measure seabird flight heights offshore.

Twelve surveys, gathering data on potentially thousands of individual birds, will be carried out over two years before the 1.4 gigawatt (GW) wind farm’s offshore construction begins on Dogger Bank in late 2023. The surveys will look primarily at kittiwakes during their breeding season although data on other bird species and marine mammals will also be collected.

Two aircraft provided by UK aviation firm Ravenair will be equipped with APEM’s combined LiDAR and digital hi-resolution camera equipment to capture data and images of birds and marine mammals. By collecting the height data and images at the same time, individual flying birds can be matched with LiDAR points, therefore recording their flight height much more accurately than via other available methods.

While LiDAR is a well-established technology used to map topography, create 3D models and even to calculate wind speeds, applying the technology to measure the height of birds in flight above the sea surface is both novel and pioneering for pre-construction surveys.

Through a remote sensing technique that uses light pulses to measure ranges, when installed on a survey aircraft, LiDAR can identify the height of birds in flight to an estimated accuracy of within one metre over the sea surface, and can rapidly cover large areas of open habitat.

This combined LiDAR and digital photography method enables the recording and analysis of flight heights and direction, age classes, distribution and bird numbers, providing a wealth of information for the project and also for the wider offshore wind sector. The team will also investigate the potential for using this technique for estimating seabird flight speeds.

All data will be made publicly available for further strategic research projects, which will help ornithologists, developers and regulators better understand how birds interact with wind farms, particularly with wind turbines.  Collision with turbines can cause bird mortality, which is one of the main potential impacts of offshore wind farms on seabird populations

During Sofia’s consenting process, collision risk modelling was carried out to estimate the probability of a bird colliding with a wind turbine. Flight height was a key parameter in this modelling and the more accurate the data inputs, the less uncertainties there will be for future offshore wind farm pre-consent modelling.

The use of LiDAR has the potential to reduce uncertainty in collision risk modelling therefore addressing a key consenting concern for all new UK offshore wind farms.

The two aircraft carrying out Sofia’s pre-construction surveys will fly at 450 metres altitude to minimise any risk of disturbance to the birds being measured. They will traverse survey lines spaced two kilometres apart across the whole array area, with each aircraft will survey half of the transects to ensure the full 593 km2 wind farm site is covered.

The surveys will be completed by the end of summer 2022. 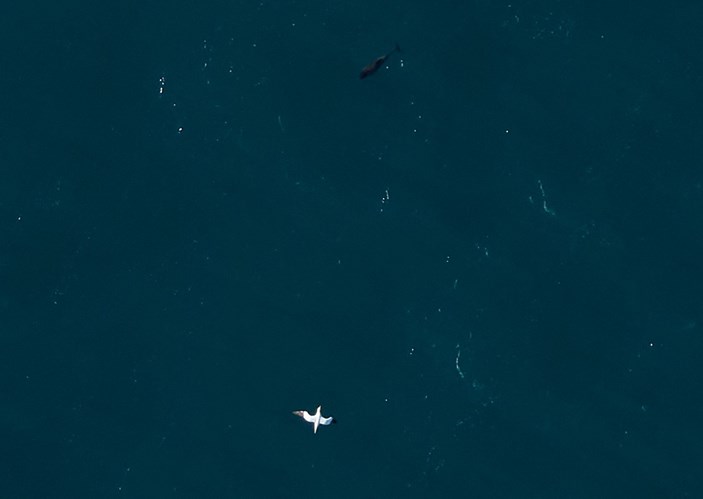 Pictures like this gannet and dolphin taken from an aircraft flying over the Dogger Bank array site are combined with data from LiDAR to identify flight height of individual birds. Where the laser identifies a bird, the LiDAR produces a cluster of points. Using GPS, the photos taken via aerial survey are matched to these point clusters to determine the flight height of individual birds.