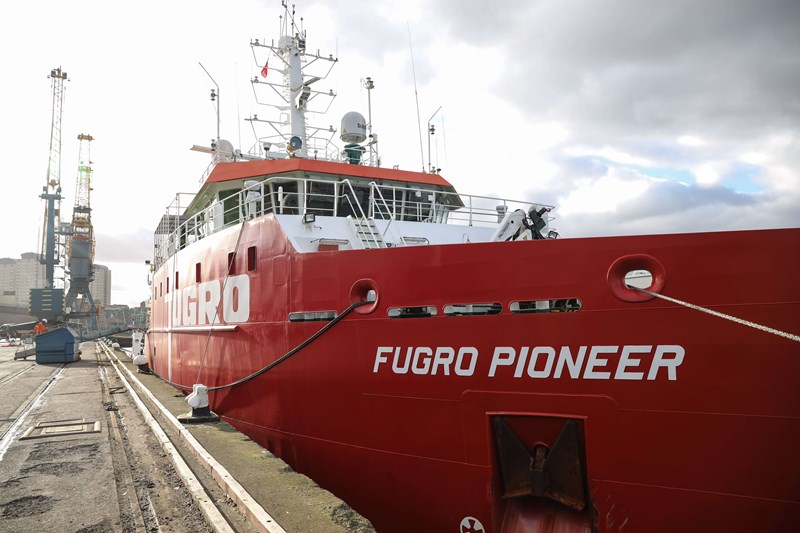 As part of this phase, both geophysical and geotechnical surveys will be carried out along the route from just off Teesside, between Redcar and Markse-by-the-Sea, to the wind farm site on Dogger Bank in the North Sea. They will provide the flagship project’s consent and engineering teams with key data about the seabed and marine conditions prior to construction.

At 1.4 gigawatt (GW), Sofia is the largest project in innogy’s development portfolio and one of the world’s biggest offshore wind farms.

Sofia Senior Project Manager, innogy’s Damien Fensome, said that the 53-metre Fugro Pioneer will focus on geophysical surveys and will be at sea for up to a month, with members of both the Sofia and Fugro teams onboard as it sails the length of the route. A local guard vessel will be chartered to support the campaign.

“This initial suite of surveys will cover a variable corridor of around 175 metres wide, and will include environmental grab samples, drop down video transects, sub-bottom seismic profiling, side-scan sonar, bathymetry and magnetometer surveys,” he said.

The export cable route geotechnical surveys that also form part of this first phase of the site investigation are due to start in March and will take up to a month to complete. These surveys will comprise cone penetration tests and vibrocores and will be carried out from the 98-metre vessel Despina.

“Together the information collected will be analysed to build up a comprehensive picture of the seafloor and sub seafloor conditions, informing the need for further surveys, the final cable route, the landfall location and the most appropriate cable installation methodologies.

“Given that Sofia’s 600km2 array site is 195 kilometres from the coast of the North East of England, and the export cable will be 220 kilometres long, we believe this is the longest such cable route survey ever undertaken for an offshore wind farm.”

Further surveys are also planned to take place during the spring and summer, along the export cable, as well as at the array site on Dogger Bank and nearer to shore. The full site investigation is due to be completed by August 2020.