Asking local school children to send in drawings to finish this sentence 'I am thankful for...' this calendar is the 34th edition of a much-loved annual publication.

For the third year running Sofia has been a proud sponsor of the annual Wilton Community Calendar, which this year celebrates its incredible 34th year in production.

The calendar once again features creative artwork drawn by students from six local primary and special schools including those closest to Sofia's onshore converter station works, Wilton and Dormanston.

This year's theme - "I am thankful for ..." - gave students the chance to reflect on what they appreciate, whether it be their families, their teddy bear or the world we live in.

The month of January page featured Sofia's Onshore Package Manager, Richard Carpenter alongside a colourful drawing of the world by 10-year-old Alfie-Jai from High Clarence Primary School who said he was thankful for: "...the earth and everything on it".

The overall winner receives a £100 voucher to spend at a local toy store and their drawing features on the front cover as well as on one of the calendar months.

This year's winning entry was drawn by 10-year-old Oakleigh from Dormanstown Primary Academy who wrote: “I am grateful to Queen Elizabeth II because she helped us in WWII and was kind. She made sure people were OK and didn’t panic. I am thankful to King Charles III because he became King and respected the Queen when she died.”

All the runners up, whose drawings feature on each month of the year, receive vouchers for £75. The winning school also receives £300 for participating and the five others £200.

Around 20,000 copies of the calendar will be delivered to local households around the Wilton International, Billingham, and North Tees industrial sites, including 14,000 around Wilton, where Sofia's onshore converter station works are now progressing.

As well as the drawings from local budding artists, the calendar includes useful safety information and details of the practical actions that would need to be taken in the unlikely event of a major emergency and that would require a response by people in the neighbouring communities. 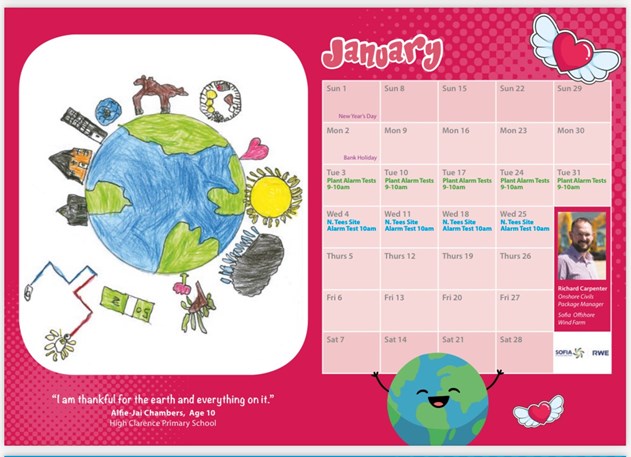