Sofia and its Tier 1's hosted a series of events to highlight contracting opportunities to the UK supply chain and encourage wide involvement in the construction of the project.

Almost 800 attendees dialled in to the first three webinars hosted by teams from Sofia and its Tier 1 contractors and run by NOF and Energi Coast.

RWE, Sofia and its contractors are committed to the development and growth of a competitive UK supply chain. In support of this they launched a series of free supply chain webinars in July 2021 to showcase contract opportunities during the construction of this flagship UK development.

The first three webinars attracted a significant number of attendees, all keen to learn more about how and when they may be able to get involved with the almost £3 billion project.

Speakers and support via procurement and package teams attended each event to outline the works programmes and the types of goods and services that will be required.

The July events included sessions from:

Van Oord - EPCI contractor for the foundations and array cables

Each event ran for approximately an hour including question and answer sessions. Any questions not addressed during the session was noted down and answered following the event, with both the Q&As and links to the webinars shared after the sessions. Almost 100 questions were dealt with by the teams.

Feedback was by and large extremely positive with responses including:

"Excellent content that was useful and informative - great to see the range of companies who attended too so useful for us in terms of networking. Overall it answered all the key questions we had and also confirmed key personnel who we need to be approaching."

"It was really useful to find out about the procurement procedures for the Sofia project and understand who is responsible for our areas of interest."

In 2021 there will be at least four webinars in the series, with a possible fifth to be confirmed. Turbine supplier Siemens Gamesa Renewable Energy's event will be held in September - to introduce the packages, with a second event with specific contract opportunities to follow in 2022.

Each webinar will be followed up by around 20 one-to-one sessions between the Tier 1 suppliers and interested Tier 2 suppliers. They will give a total of at least 60 individual UK companies the chance to meet and discuss opportunities with the Tier 1 contractors.

Supplier who missed out on the events can now watch the webinars online here. 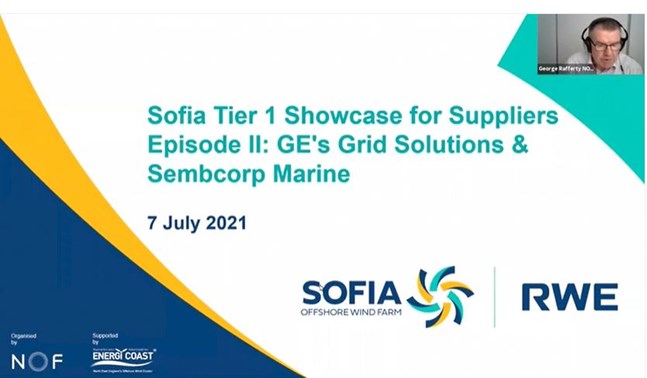