Sofia was represented at the well-attended event to highlight the career opportunities in the offshore wind sector and specific routes into the growing industry.

Sofia's STEM team represented the project at the Redcar & Cleveland Jobs Fair, held at the Grangetown United Community Hub and open to anyone seeking a new job or work, or with an interest in potential career opportunities.

More than 170 attended the full day event, with Sofia's stand being one of around 12 representing local companies and business sectors.

Mike Cargill, of UK STEM staffed the stand for Sofia and had a steady stream of visitors interested in working with the project or its contractors, as well as in the myraid careers available in the wider offshore wind sector.

He said there were many younger people who had seen it advertised and taken it on themselves to attend on the day, many being particularly "switched on" about the industry and its supply chain. Many had already completed, or were in the process of gaining, Global Wind Organisation certifications, to help pave their way into roles such as offshore wind technician, vessel crew or construction engineers.

"There was a significant amount of interest in the working with the project, particularly as there is now visible activity happening on the converter station site adjacent to Wilton International. Stand visitors with experience as plant operators or riggers were appreciative of being provided leads with construction contractors undertaking local works for the project such as Jones Bros and KIER."

There was also quite some interest in apprenticeships and the qualifications you need, particularly to become a wind turbine technician. (Answer: Usually 5 GCSEs at grades 9 to 4 (A* to C), or equivalent, including English and maths).

Mike held one-to-ones at the project stand with more than 45 people during the event which was organised by Redcar & Cleveland Borough Council and supported by Teesworks Skills Academy. 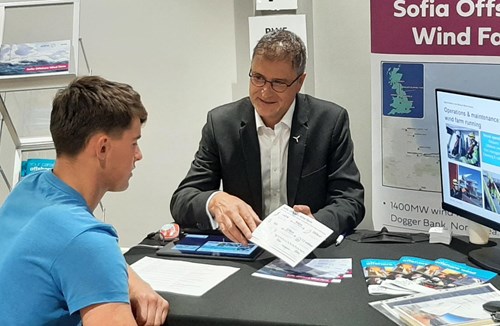