The Sofia team ran two 'supergrid' sessions for Newcastle University masters students, to see who could compete to build a turbine tower and blades and run their turbine at the highest profit.

The aim of the sessions was to give the students - MSc in Renewable Energy, Enterprise & Management - a hands-on experience of some of the factors that are considered when building a wind farm, and how to compete on an international energy market.

It was essentially a business game where the students had to use maths and science as they built their turbine towers and blades and think logically and systematically to predict electricity prices, seeing first-hand the effect of costs and competition on energy prices.

Newcastle University's Katie Wray Associate Dean, Lifelong Learning & Skills and Lecturer in Enterprise had organised the sessions to enhance the learning of the students who come from a wide range of first degree backgrounds.

The students, working in 10 small groups under the flag of a European country, were given desk-generators and transmitters connected to a computer-based software 'supergrid', fans as the wind source, K'nex construction sets, cardboard and scissors, and tasked with building a wind turbine tower and blades at lowest 'cost'.

The cost of each teams' effort was calculated using the weight of the K'nex in the built tower and the area per millimetre-square of the cardboard blades.

Once built, the teams - each a country - had time to optimise the blade size, angle and balance before a practice round gave them the time to work out how much they needed to charge per unit for their energy (measured in millijoules) to cover the cost of their tower and blades.

Their data was gathered remotely and live action was projected on a screen for all to see, which brought the exercise to life.

In the final stage, competition rounds took place over two and five minute rounds where the students were asked to predict the cost of the power they sold into the grid, simulating the challenges facing large operators.

To shake things up there was a random wind speed change for every group every 20 seconds, which could swap them from being in the lead to being in a loss making situation. 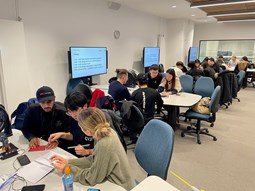 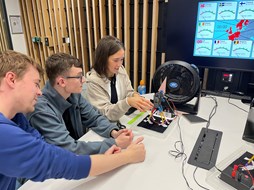 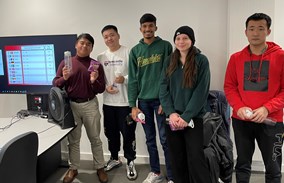 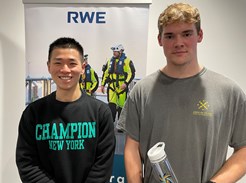 The students engaged in the supergrid session with winners from day one bottom left and day two bottom right.