Two Year 5 classes from Errington Primary School in Redcar had a hands-on day mapping an offshore wind farm cable route to learn about how the developments are designed and planned.

A total of 46 students got the opportunity to work in teams to figure out different routes the cable could take from the offshore wind farm site to the onshore converter station, taking care to avoid constraints such as marine conservation areas.

Sofia's education consultation Rich Hurst gave an opening presentation highlighting the importance of efficiently planning the route the cable takes from the wind farm, the types of equipment used and challenges that may arise. Included in the presentation were photos of the construction work now underway on Sofia's onshore converter station and cable route, so they could learn more about what was happening on their doorstep.

A key element of the cable route planning activity involved taking account of the existing features and terrains, each of which has a cost associated, so the budding wind farm developers had to apply their maths skills to work out the potential costs of their chosen course.

The Y5 pupils from Errington Primary were joined in the afternoon by Y5s from New Marske Primary and West Garth Primary who walked to the school for a special assembly on offshore wind energy and the Sofia project.

Headteacher at Errington Primary, Tees Valley Collaborative Trust, Sarah Rule said: "We thoroughly enjoyed the workshop and the presentations and hope we can utilise your skills yearly in school". 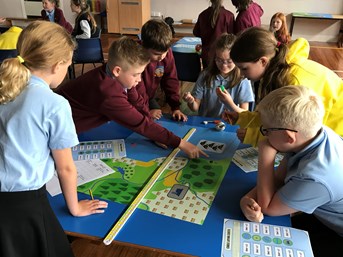